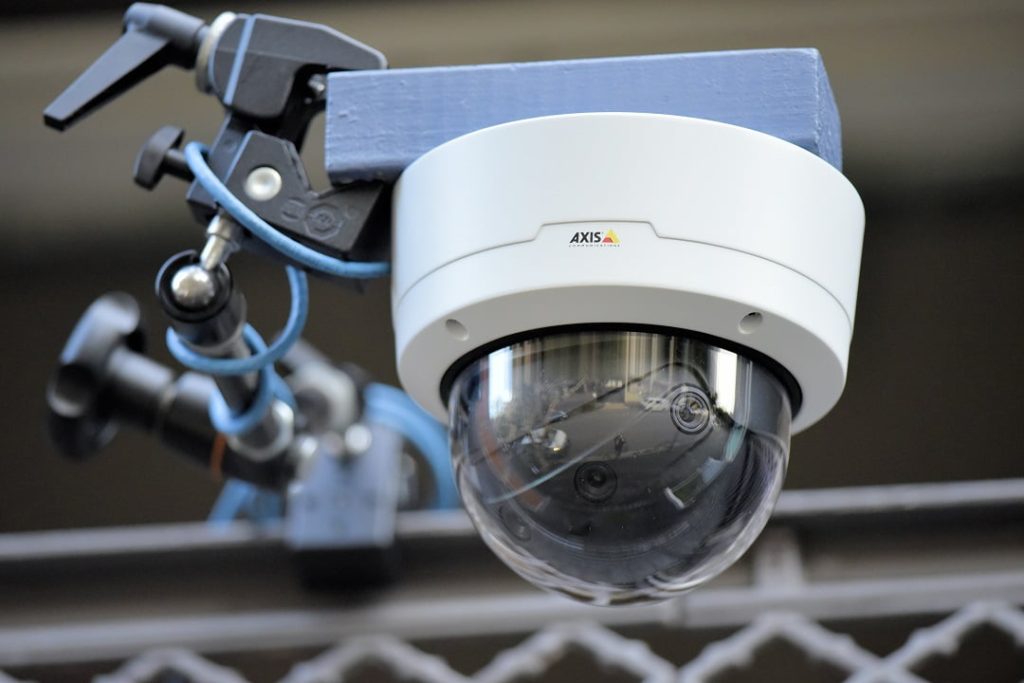 See in the big image how the epic angle of view gives situational awareness at a glance?

AXIS Q3819-PVE Panoramic’s 4 camera heads feature relatively long fixed focal lengths of 5.89mm with an aperture of F1.88, which is quite fast considering lens length, and the 180-degree wide views have a vertical depth of 38 degrees, making this camera ideal for large areas. However, it’s going to be a narrow vertical plane in our jam-packed street application. Other features include PTRZ, Zipstream compression with H.264 baseline, high and main, H.265 compression and Motion JPEG.

This is a robust unit – the casing is rated IP66/IP67 and NEMA 4X against water and dust, and IK10-rated for impact-resistance. The cast aluminium body has a polycarbonate hard coated clear dome with a dehumidifying membrane and the camera has an operating range of -40 to 65C. It’s not light for a dome, either, as I discover when shoehorning its 2.4kg bulk onto the Magic Arm and draping it over the balcony.

My first impressions of this Axis camera are its massive angle of view. It really reaches from one end of the street to the other through 180 degrees. It’s stupendous and it takes a long time to get used to it. This is one of those cameras that makes me hate the little Benq 1920 x 1080-pixel monitor. I need a video wall to appreciate what I’ve got going on here – you could fill 4 large monitors with this view. And while angle of view is strong, depth of field is right behind it. You’d expect DoF to be strong when you’ve got 4 camera heads, each offering reasonably high resolution, but I’m still surprised by the fine detail of its performance.

For a horizontally shallow street view like this, the vertical angle of view I have to play with is a little shallow at 38 degrees – this camera is better suited to larger areas, but it still does an amazing job. Over the far side of the road, I can see people’s lower legs going by if I want to see most the near-side pavement, but it’s possible to tilt and get one or the other – this comes down to my application – depth of field opposite the camera is only 20 metres. There’s a rectilinear curve in the centre of the image on the near side but it’s giving me more of the scene I need.