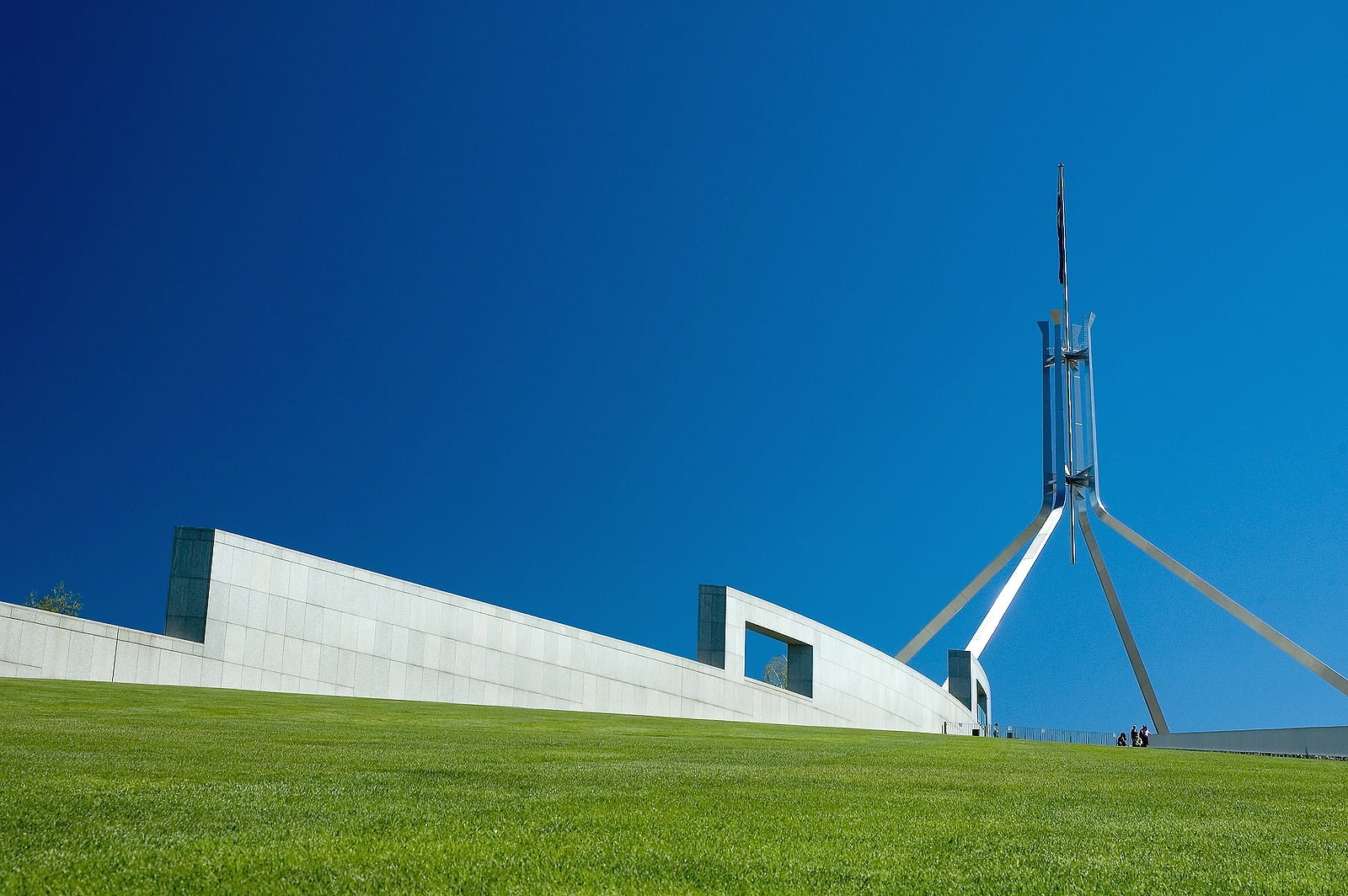 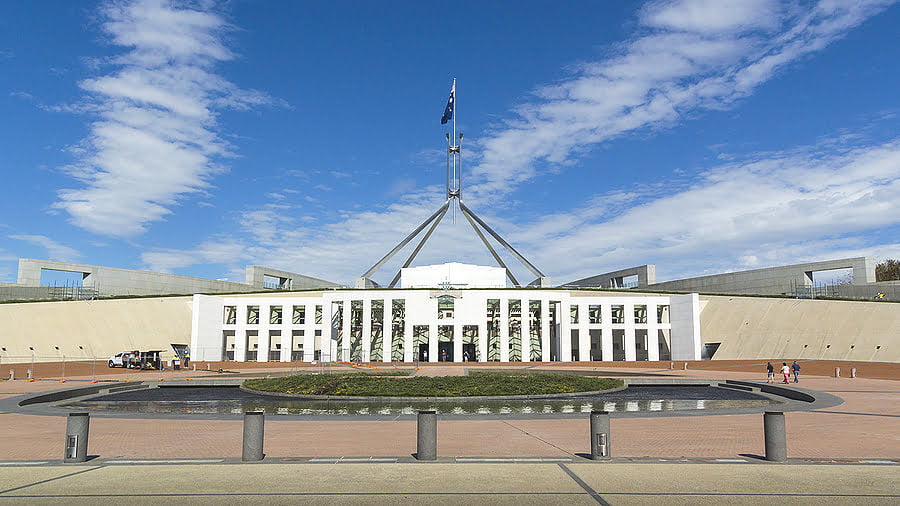 Security works at Parliament House - big image shows how things used to be...

Parliament House has been given a begrudging pass mark by the Australian National Audit Office for a huge security ‘upgrade’ that took about double the allocated time. But Civil Liberties Australia believes the upgrade is a massively expensive ‘fail’ that reduced public access, increased the dangers if trouble breaks out and ruined the entire architectural concept of the ‘people’s house’, writes Bill Rowlings*.

Most fundamentally, the ‘upgrade’ destroyed the concept of Australian kids and adults being able to run, roll and play on the lawn over the top of the building. That intrinsic architectural feature was to provide visual display of the crucial notion that it is the people’s house, not the building that’s the belonging or the plaything of the politicians and the bureaucrats.

In an audit costing $A0.5m, the ANAO declared the security upgrade project ‘largely effective’, which is damning by very faint praise. In part of the report, the ANAO says: “The Department of Parliamentary Services (DPS) did not establish effective contract administration and performance monitoring arrangements”.

In the private sector, a number of heads might roll with such a report. But not at Parliament House, the spending splurge centre of the nation where money is no object if spent for self-indulgence.

The upgrade works took about 7 years and went way over budget, costing some $145.4m…at least. There’s a strong suspicion that not everything upgraded was included in that figure, including some $32m for upgrading emergency generators, work only just completed in mid-2021, if reports can be believed.

The total amount that the pollies spent on upgrading their own safety in Canberra was about $180m…and then some. That’s about $800,000 per federal politician! It has been a relatively giant project for the DPS, with an annual operating budget of about $270m, and 1030 staff. The ANAO report – without saying so – gives a strong sense the job was too big for them.

A brains trust of ‘multi-agency security experts’, operating as a ‘taskforce’, produced an upgrade plan in October 2014, just after the national terrorism alert level was raised in September 2014 – without public justification – to Probable after being at Medium for 13 years.

It’s still at Probable. Nowadays, that level is possibly more justified because the Australian people are fed up with the rorts and self-serving behaviours of ruling politicians and their mates, and their wasteful spending on unnecessary security upgrades that, in many respects, have made the building less safe for visitors and others.

There is no mention of doing a full security risk assessment, which is mandatory for any other federal government site, as to the dire or proximate nature of any threat. The nervous nellies of the security services, with no budget restrictions because politicians always prioritise spending on themselves, their comforts and safety, went for broke.

They decided to fence off the lawn, build a new gate house to protect ministers even more, bung in often misbehaving bollards to control car access, toughen the glass in windows and main and side skylights (set in to the people’s hill), whack in greater electronic entry controls, expand CCTV massively and upgrade the mobile phone system – generally spending like neither taxpayers or anyone else who should have been consulted had any say in the matter.

Which they didn’t. You would think the security whizzes would consult people affected by the possible changes. Well, they and DPS failed to consult, as ANAO points out those consulted did not include:

…so just the major users of the building, other than politicians and public servants, really.

The upgrade program was due to run until 30 June 2018. In reality, additions and modifications extended into 2021, even though the building was closed to visitors for a long period which might have made security works easier and potentially quicker.

It is a bit hard to work out how the ANAO gave the DPS a rating of ‘largely effective’ based on the above figures. You would think the rating should have been ‘ineffective and incompetent’.

The whole thing shows how low the bar is set for government departments, and why nobody gives a toss when the Department of Defence is years behind with deliverables (sometimes 10 years) and over budget by billions of $$$ ($10 billion or more, sometimes).

It also shows how the ANAO can gild a limp lily. While supposedly inquiring into planning, the ANAO avoided any inquiry into whether the taskforce’s strategic thinking, and its plan in the first place, was appropriate. The answer, of course, is no, it wasn’t. The entire upgrade was a huge over-reaction to an arbitrary change in a ‘threat’ level which has no objective basis in reality.

It cost a motza, wasn’t needed, was less than well managed, has made the place harder to access and more dangerous by building in dead-ends, negated the building’s prime design statement and feature, and generally made the environs more sparse and miserable. The pollies think they are safer (which is probably not correct, because of other security changes as well), and their mobile phones work better. Just don’t anyone ask if any of it was value for money.

You can find the ANAO report in full here.